Art On the Plaza 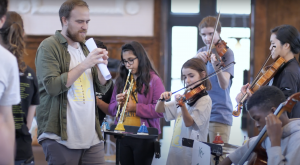 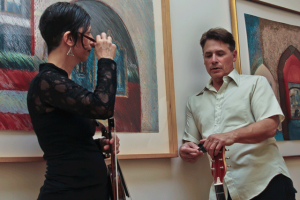 Danny Clay: April 20, 2021 – July 19, 2021
Danny Clay is a composer and teaching artist whose work is deeply rooted in curiosity, collaboration, and the sheer joy of making things with people of all ages and levels of artistic experience. For the sound installation “From Place to Place,” he gave a creative challenge to over a hundred young musicians throughout the Bay Area, from kindergarteners to high schoolers.

Using instruments, voices, and objects found around their living space, the young musicians made recordings of original sounds inspired by these prompts, which were assembled to create this site specific musical collage for the downtown Berkeley BART Plaza.

Danny Clay works closely with artists, students, and community members alike, he builds worlds of inquiry, play, and perpetual discovery that integrate elements of sound, movement, theater, and visual design. His work has been performed by the International Contemporary Ensemble (ICE), the San Francisco Contemporary Music Players (SFCMP), Ensemble Dal Niente, and has been presented by the deYoung Museum, San Francisco Performances, the McEvoy Foundation for the Arts at the Minnesota Street Project, the Grey Area Foundation for the Arts, the Meaney Center for the Arts in Seattle, and university programs throughout the United States.

“From Place to Place” was mastered by Brendan Michael West.

Violinist Thea Farhadian and guitarist Dean Santomieri have been performing together since 2011. Their music is almost exclusively improvisational - created in the moment from many stylistic and global musical influences. Their creative process results in a musical conversation. One player begins and the other responds intuitively based upon the timbre, pitch, energy, and artistic direction of the music. A New Sense of Place is a site-specific sound installation created in the hope that people moving through the plaza will be pleasantly roused from their thoughts, conversations, or devices, by the unexpected gift of music.

A two-minute excerpt of the installation can be heard here:

https://soundcloud.com/tfarhad/a-new-sense-of-place-2020/s-ol8K94fEQhb
Thanks to Myles Boisen and David Kwan, for recording and multichannel mixing.

Thea Farhadian is a performer/composer who works with solo violin and interactive electronics, acoustic improvisation, solo laptop, radio art, and video. Her solo pieces for violin and electronics combine a classical music background with extended technique and digital processing. As a free improviser, she has performed and recorded with musicians internationally. Her work has been seen at venues which include the Issue Project Room, and Alternative Museum New York City, Galerie Mario Mazolli, Sowieso, and Quiet Cue in Berlin, the Room Series, Meridian Gallery, and Center for New Music in San Francisco, and the Center for Contemporary Experimental Art in Yerevan, Armenia. Thea is a former member of the Berkeley Symphony orchestra where she played under Kent Nagano for ten years. For more information visitwww.theafarhadian.com

Dean Santomieri composes and performs using electric resonator guitars in non-standard tunings. Stylistically his playing is most closely associated with the modern classical avant-garde and is characterized by a loose compositional framework that allows for improvisatory explorations. Since 2011 he has been playing and recording with violinist Thea Farhadian, in the Santomieri-Farhadian Duo. He also regularly performs as a spoken word artist, usually with musical accompaniment. His stories and poems are inspired by music, dreams, the visual arts, word games and intentionally misheard/misread items from radio and newspapers. In addition to performing with various improvisers, he has been a member of the groups: Donkey Boy, Malcolm Mooney and the 10th Planet, Ghost in the House, I Franzen and the Cornelius Cardew Choir. More info and recordings at: http://deansantomieri.com/ 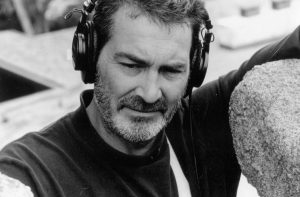 Inspired by Berkeleys rich history as chronicled in archival recordings from KPFA and the Pacifica Radio Archives, Berkeley Sonic Prayer Flags is an eight-channel sound installation featuring an eclectic mix of audio clips from the past and present. From intimate interviews and personal performances to gatherings of celebration and protest, these sound elements span a range of over 70 years including voices from the 1940s peace movement and the 1960s free speech era. This piece invites listeners to witness the sounds of the poetry, music, progressive voices, radical thinking, and activism that makes Berkeley what it is today.

This piece is dedicated to Erik Bauersfeld who served as the Director of KPFA’s Drama and Literature Department for over 30 years and who mentored scores of sound artists with his love, knowledge and appreciation of the arts. 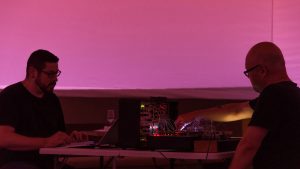 Histories of the Present is a multichannel site specific sound installation featuring field recordings from Berkeley’s urban, industrial, and natural environments interwoven with recorded multilingual texts sourced from the City of Berkeley’s municipal codes. The collage of recordings is digitally processed and synthesized to create a harmonic composition which moves through the plaza space. The installation is a meditation on the contingent relationships between the array of human activity taking place in Berkeley and the area’s ecological systems.

Maggi Payne is Co-Director (since 1992) of the Center for Contemporary Music at Mills College, Oakland, CA, where she teaches recording engineering, composition, and electronic music. She also freelances as a recording engineer and editor and a historical remastering engineer.

Her electroacoustic works often include visual elements which she creates, including video, dance, transparencies, and film. She enjoys collaborating with other artists and has worked with video artist Ed Tannenbaum for over twenty years. She is also a flutist, and has written several works for flute as well as other acoustic instruments.

Running from July 18 through October 17, 2019, the downtown BART plaza will feature a new immersive sound installation called “Immersion—Bay Area Soundscape” is a discrete eight-channel installation using sounds of nature the artist recorded in the Bay Area over many years. The sonic environment this work creates is reminiscent of sounds that once likely existed in this very location—windstorms, thunder, rain, streams, a seashore, underwater sounds, frogs, crickets, and birds. “Immersion” follows water from storm to creek and ocean portraying nature’s water cycle, which is so critical to the life of this planet. Sounds travel both laterally and through the four pairs of speakers, providing an immersive experience for people standing still or traversing the space. 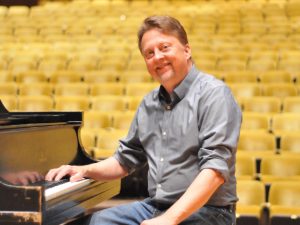 Edmund Campion has been active as a composer, performing artist, software developer, collaborating artist, sound artist, and educator for over 25 years.  He is a Professor of Music at the University of California, Berkeley, and is the Director at the Center for New Music and Audio Technologies (www.cnmat.berkeley.edu).  Campion has received major recognition for his work and has been commissioned by leading ensembles in the world.  His major solo performing career began in 1996 with a commission from IRCAM at the Pompidou Center in Paris where he developed the first version of NatSel, a computer/piano hybrid instrument that he has continued to develop through the decades.  In 2015, he was co-commissioned with video artist/composer Kurt Hentschläger for a 25-minute work the Ensemble Intercontemporain.  In 2016, Campion received a commission from the Gugak Orchestra in Korea to compose a piece for a full orchestra of ancient Korean instruments.  With a 2016 Guggenheim Fellowship, he was able to travel to Korea to study the traditional Korean instruments with the world-class musicians of the orchestra. The piece is being reprised this coming Fall at the National Gugak Center in Seoul and will be recorded for CD

The work includes singing voices from the University Chamber Choruses at UC Berkeley, led by the Director of Choral Programs, Wei Cheng. Steve Adams provided the saxophone fragments and Jeremy Wagner, from the Center for New Music and Audio Technologies (CNMAT), assisted with recording and spatial audio mixing

Running from April 18 through July 17, 2019, the downtown BART plaza will feature a new immersive sound installation called "Berkeley Rain" by composer and sound artist Edmund J. Campion. “Berkeley Rain” is a site specific music composition and sound installation created for the Berkeley BART Plaza. It is a timepiece, not for telling time, but one whose mysterious sonic repetitions express a continual and immersive now. Inspired by the unifying effects of rain and resonance, the sounds drip and pulse as they spatially accompany each passer-by. This audio soundscape is thirty minutes long and repeats on the hour and half hour. 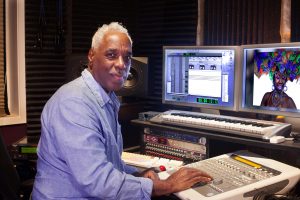 The soundscape, ‘The City The Block’ A Village Amongst Us…, represents and reflects the diverse culture and history of the City of Berkeley, and our Nation; while enhancing the BART PLAZA experience, with multi-layered tableaus of sound, emanating in and out, and from all around.

Throughout his lifetime, Robinson has personally experienced the City of Berkeley’s rich and diverse history and culture.

Our young and old; our mothers and fathers, sister and brothers; and fellow earthly citizens; from all backgrounds and cultures, can sit, eat, relax, stroll, and imagine what life was, what it is, and hopefully what it will be while listening to this soundscape on the BART Plaza beginning on January 18, 2019.

"I’m proud and privileged to be one of the artists selected to create and share my vision of history, culture, hope and inspiration." – Greg Robinson

‘The City The Block’ A Village Amongst Us… (2018)
represents and reflects the diverse culture and history of the City of Berkeley, and our Nation... 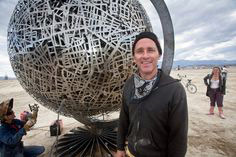 born and raised in Texas
BFA from University of Texas in Austin & apprenticed with Sculptor Luis Jimenez
michaelchristian.com

Michael Christian has lived and worked in the San Francisco Bay Area since the summer of 1995 and has been in his current studio, Xian Productions in Berkeley, for the past 11 years. Some of Michael’s work have found permanent homes in the Bay Area as well as abroad.

“I’m inspired by the genius of nature and build things that make me smile. I attempt to use the simplest language and smallest words possible. I build large fun and playful sculptures.” – Michael Christian 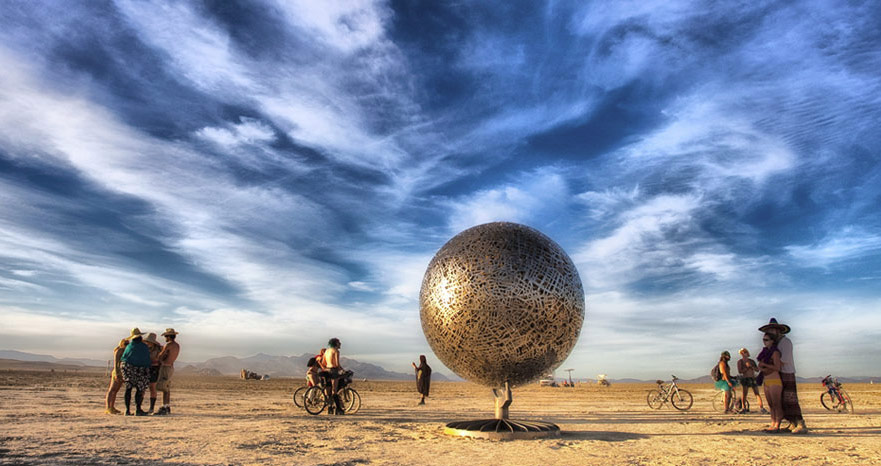 Home is a 13 foot tall illuminated globe created with multiple layers of metal cut in the shapes of street maps from cities around the world. Installed at our city’s central transit hub, this artwork speaks to the interconnectedness of all people and places around the world. 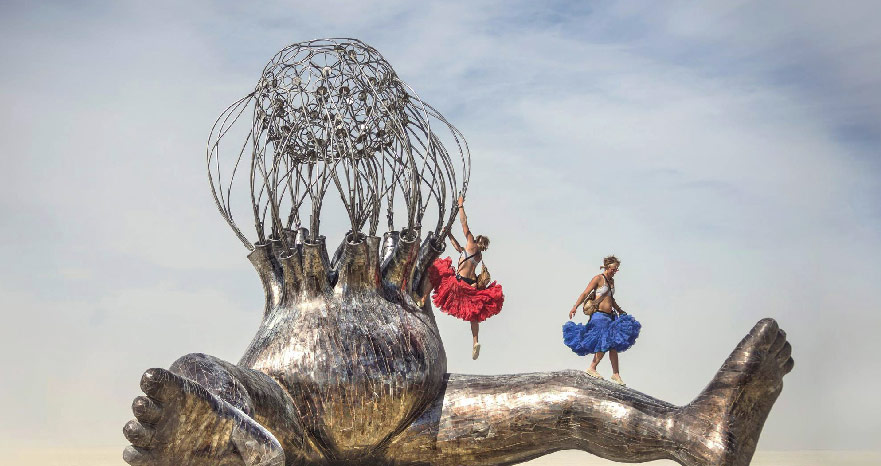 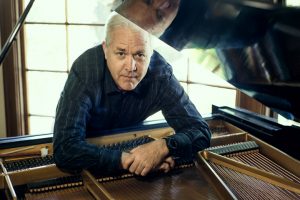 Chris Brown is a composer, pianist and electronic musician.  He makes music with self-designed sonic systems that include acoustic and electroacoustic instruments, interactive software, computer networks, microtonal tunings, and improvisation. His compositions are designs for performances in which people bring to life the musical structures embedded in scores, instruments, and machines. Chris is a founding member of The HUB, the pioneering network music ensemble and was Co-Director of the Center for Contemporary Music (CCM) at Mills College in Oakland, California from 1990-2018. http://www.cbmuse.com

“Collaboration and improvisation are consistent themes in my work, along with the invention and performance of new electronic instruments and software.” – Chris Brown

Chris’s sound installation for the Berkeley BART plaza suggests conversations between distant places, environments, people, rituals, and parties on a global scale.  The plaza’s eight sound poles create a sonic corridor through which excerpts of stereophonic recordings of outdoor music performances and natural sounds from Cuba, Bali, India, and the U.S. move in a free-flowing collage to accompany the movement of pedestrians to and from the BART station.  Polyrhythms from many cultures and places merge together, interpreting everyday movement as dance.

Check out more examples of his work below with "Imaginary Birds" and "The Thorn".

The Thorn (2017)
Recorded excerpt from live performance at the De Young Museum in San Francisco, 11.18.2018; with Chris Brown, keyboard and electronics, and William Winant, percussion.